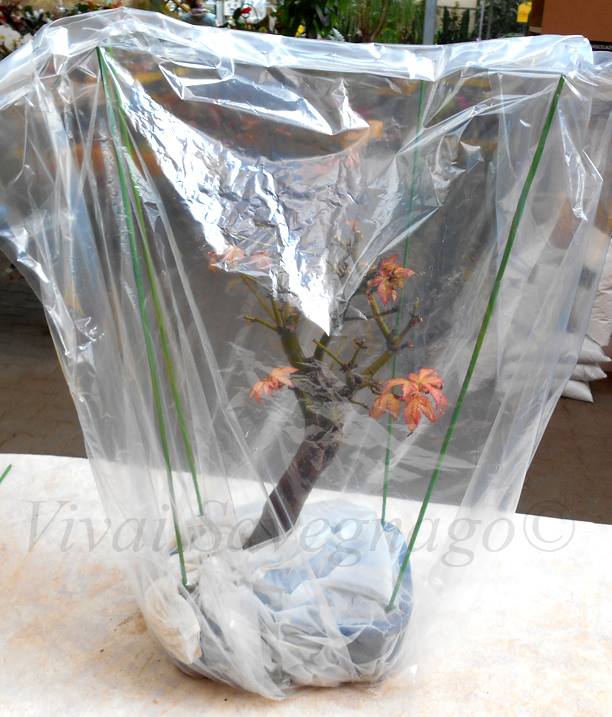 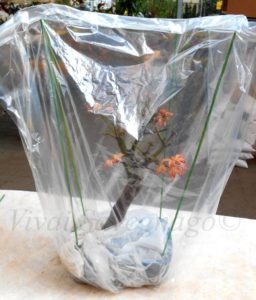 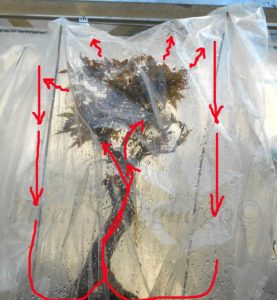 The bagging technique is applied to plants that have suffered severe stress, such as a harvest (transplant) or a drastic pruning of the roots.

It can also be useful after a “dry blow”, a situation that occurs, for example, when you have forgotten to water a bonsai for a while or, in the presence of regular watering, due to a summer day too muggy or with particularly hot wind, able to completely dry the soil and cause excessive transpiration to the plant.

The purpose of bagging is to create a moist microclimate inside the bag in order to minimize the stress of the plant, so that it uses all its energy to recover promptly.

Depending on the plant to be packaged and its problems, it is possible to have different times of bagging, color of the bag, placement during bagging and so on. In general, the entire plant is packaged, including the pot, using a closed plastic bag and it takes a few days to a month to see some signs of improvement, after which it is also possible to remove or replace the bag.

Once irrigated and packaged, the plant should be placed in a position sheltered from the sun and wind and kept in a controlled position, but without irrigating, let alone fertilizing.
Once an acceptable form of health has been achieved, the air can begin to circulate with a one-week passage with an open bag at the bottom. In this period we return to irrigate.
Finally it will be possible to completely remove the bag provided that it is in a sufficiently warm period, without moving the plant from where it remained during treatment and normally watering it.

The transparent bag develops inside a very favorable microclimate for rooting (therefore it is indicated after transplants) as the plant inside does not lose energy in transpiration, and if this is without leaves, the atmospheric agents do not dry the trunk and branches .

The black bag, in addition to the above, keeps the plant in the dark; it is carried out only on completely leafless plants: in this way the plant emits as many gems as possible in a short time, in search of light for its survival (as when we put it in the shade). The black envelope is not recommended, however, with conifers, because the latter would produce needles or yellow scales in the dark.

Another positive aspect of the black bag is to increase the internal temperature, so as to reproduce a spring effect, but it is necessary however to pay attention: in late spring or summer the plants in black bags must be placed absolutely in full shade, otherwise you would risk overheating too much the plant.

If after some days the plant starts to make the new buds tick, of about 1cm, then it is necessary to replace the black bag with a transparent one, in order to continue to keep the internal humidity very high keeping the plant hydrated, but at the same time the new buds will be given the opportunity to receive the right amount of light in order to carry out the correct photosynthesis, for an abundant formation of roots.

Someone reports success stories in which a double bagging was performed, in which the vase is firstly stuffed and then the whole plant, generating two small habitats one inside the other.

SOS Bonsai is a free site dedicated to the Bonsai art with useful information and links to botanical files, books, events, exhibitions.